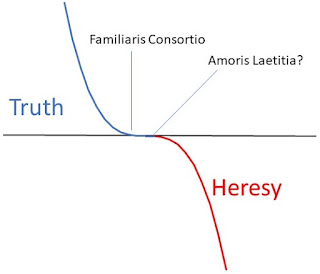 A critic of Amoris Laetitia this week brought out the specter of the Episcopalian Church as a reason why the apostolic exhortation is flawed:  it will dilute the truth and lead to a culture in the Catholic Church of complete permissiveness, where nothing is a sin and every lifestyle choice is celebrated, no matter how contrary to Catholic moral teaching.

It's the slippery slope argument:  Amoris Laetitia might technically be orthodox, but it's a step closer toward heterodoxy, and we must not go anywhere near there.  We need to protect the purity and sanctity of the Church and her sacraments!

Of all the arguments against Amoris Laetitia, this is by far the worst.

We need to avoid the truth ... because it might lead to error?

The concept of successive approximation in mathematics is relevant to this discussion.  There are a lot of ways to move from an initial guess closer and closer to the solution of a problem.  To give a simple example, consider the graph of the function "one divided by x". 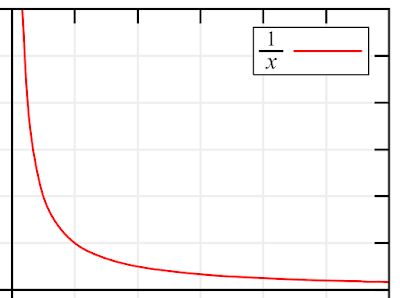 Successive approximation is similar to the way the Church continually advances toward a fuller expression of the truth.  No matter how much the Church has taught on a matter in the past, it will always have more to teach.  Church teaching never stays fixed, it is always progressing.  Pope Saint John Paul II explained this continuous advancement in teaching as follows:


"for the Church to progress towards a daily more complete and profound awareness of the truth, which has already been given to her in its entirety by the Lord."

For example, the church continually developed its understanding of Christology in the first millennium ecumenical councils.  Each successive council provided greater clarity on who Jesus Christ is: 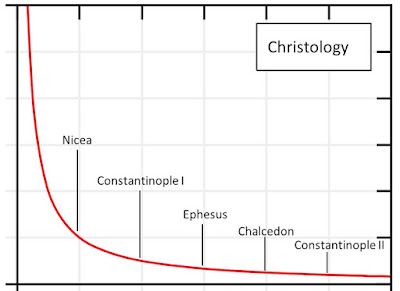 And yet there have always been elements in the Church who want to halt this advancement in teaching, to cling to some fixed point in the past as the moment past which the Church could teach no more.  For example, after each first millennium ecumenical council, there was always a strong reaction from certain elements in the church claiming that the council had betrayed the prior teachings of the church.  This was especially true after the Council of Chalcedon, which adopted a new statement of Christology just 20 years after the Council of Ephesus had, according to the critics, settled all the questions on Christology once and for all.  There was a strong reaction in parts of the eastern church that has lasted to the present day:  "Why can't we just stay with Ephesus?"

"Why can't we just stay with the 1917 Code of Canon Law? Divorced and remarried couples are ipso facto notorious and are to be excommunicated following a warning from their ordinary.  That is the unchanging perennial discipline of the Church!"

Critics who invoke the slippery slope argument are worried that the Church is getting closer to a point, past which the Church would be teaching heresy.  But this fear ignores that, just as there is a mathematical limit on 1/x as x increases, there is a divine limit on the Church as her teaching on a subject increases, and that limit is the truth.

The Church is limited to teaching truth 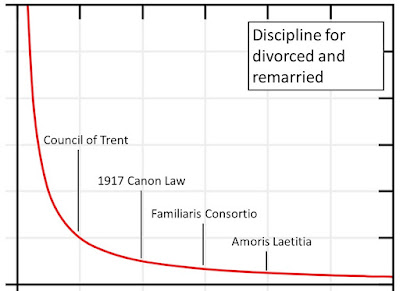 1/x is not only getting closer to zero as x increases, it's also getting closer to negative numbers.  But no one who believes in the laws of mathematics would worry that 1/x might eventually hit a negative number.  No mathematician would say, "If we continue down the path of increasing x, we're going to end up with a negative number!"  Likewise, no one who believes in the divine promise of Jesus Christ to Saint Peter should worry that the Catholic Church might eventually teach heresy, even if a new formulation of teaching, though true, is also closer to a dangerous error.  No Catholic should every say, "If we continue down this path of teaching, we're going end up with heresy!"

For example, the Council of Chalcedon's teaching was closer to the error of Nestorianism than the Council of Ephesus.  But Chalcedon's teaching was also true, and closer to the full expression of truth than Ephesus.  And the Church never fell off the cliff into Nestorianism or Monophysitism, but perfectly navigated the path of truth between both heresies.

Likewise, Amoris Laetitia is closer than Familiaris Consortio to expressing the truth that not every objectively grave sin is a mortal sin.  There may be cases where the required elements of full knowledge and deliberate consent are lacking, and Amoris Laetitia calls on priests and penitents to discern this in individual cases.  Is this closer than Familiaris Consortio to the danger of an unrestricted access to the sacraments, regardless of whether one is in a state of grace or has a firm purpose of amendment?  Yes, but the Catholic Church is not there yet, and thanks to the divine promise of Jesus Christ to Saint Peter, the Catholic Church will never fall into such an error.

Sadly for our Episcopalian brothers and sisters, the divine promise of Jesus Christ does not extend to Christians who abandon the Successor of Saint Peter.  By attacking the teaching of Pope Francis, the critics of Amoris Laetitia have placed themselves in danger of that slippery slope.
Posted by Papal Loyalist

Has a Pope ever taught heresy?